Spanning from December to January, I worked on developing two narrative stories, one for English and Design and another with my film partner for our short film.

In my story for English and Design, I write about a girl who has a hard time pausing to enjoy life, opting to instead overwork and overwhelm herself with extracurriculars. Often times I feel this way, not so much because I do an extreme amount of extracurriculars, though those too can be overwhelming at times, but more because I relate to the inability to feel like I can pause and take a breath. Whether it’s expectations from parents or teachers, projects in school, or goals I set for myself, often times I wish I made more time for sitting, relaxing, and watching the nature go by.

Below you can find the link to my written piece, along with the design portion that went along with this assignment. 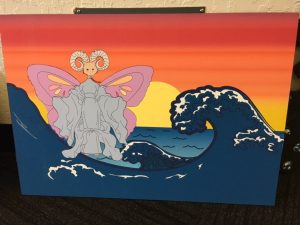 My flash fiction story is about a girl so caught up in the responsibilities of school and extracurricular activities that she doesn’t take the time to look around and enjoy life. The turning point in the story occurs when she becomes so stressed and tired that she crashes her car and stumbles into the woods, falling into a  tranceful delusion of her turning into the trees and nature around her.