The purpose of the Senior Zenith Project is to ignite my passion and elevate my skills and experiences to create my ultimate and most successful Freestyle project.

My Zenith project was to film the same script that in two different technical ways: the Western way and the Eastern way. The script I wrote was only three pages long because I intended the videos to be two to three minutes long. Since my zenith research paper was on the cultural differences in Hollywood film and Hong Kong film, I had to do some research into the different styles and the differences in them intrigued me to further explore the topic. As someone who has been immersed in both cultures and is passionate about film, I thought this project not only allowed me to learn more about filmmaking but also allowed me to connect with my origins in an interesting and meaningful way.

This is the Western version of my Zenith project. Techniques that I incorporated in the film included the dolly zoom, the low angle trunk shot, dutch angle, the close-up montage, the whip pan, one point perspective, and long tracking shot. I drew inspiration from directors such as Quentin Tarantino, Edgar Wright, Paul Thomas Anderson, Stanley Kubrick, Wes Anderson, Alfred Hitchcock, and Martin Scorsese.

When the Zenith project was introduced to us I panicked because I didn’t have a single clue on what I should do for the project. I also didn’t want to make a hasty decision because I knew I would hate myself later on if I was stuck with a project I didn’t truly like. So I started thinking. What is it that I care about and could build an entire project around? The first thing that popped up in my mind was, of course, film. Then, as I was looking through my hard drive, I saw the folder that I had put all my Chinese films in. The imaginary light bulb suddenly lit up above my head very cartoonishly, and at that moment I knew what I wanted to work on for the next few months. 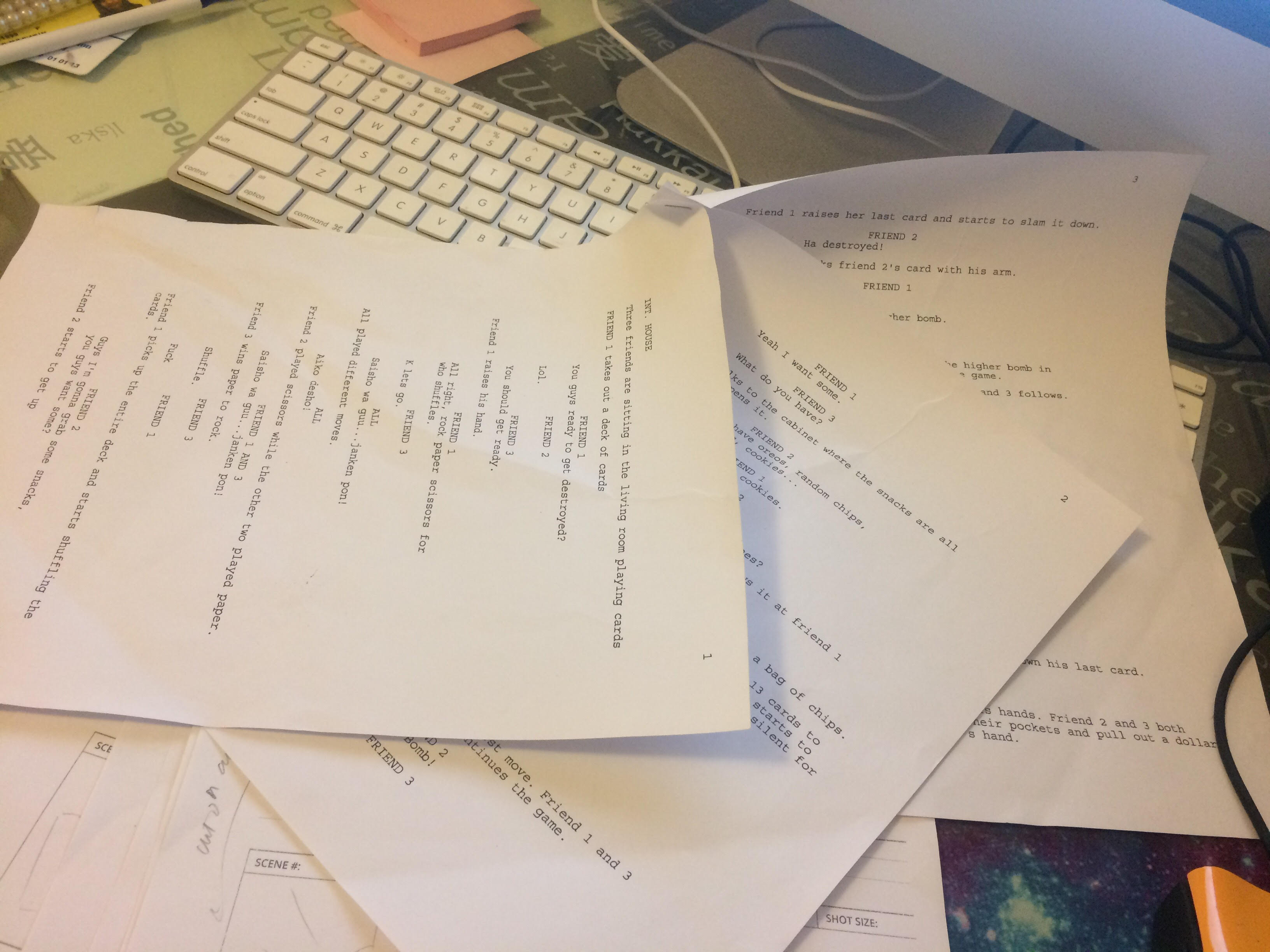 My Zenith project was to film the same script that in two different technical ways: the Western way and the Eastern way. The script I wrote was only three pages long because I intended the videos to be two to three minutes long. Since my zenith research paper was on the cultural differences in Hollywood film and Hong Kong film, I had to do some research into the different styles and the differences in them intrigued me to further explore the topic. As someone who has been immersed in both cultures and is passionate about film, I thought this project not only allowed me to learn more about filmmaking but also allowed me to connect with my origins in an interesting and meaningful way.

Through my research process I deepened my understanding of the different film techniques t hat are commonly used by directors from their respective country. As I was researching, random shots from different movies started appearing in my he
ad and I would picture them filmed in another way. For example, how would Wong Kar-Wai have filmed the close up montage scene in Edgar Wright’s Shaun of the Dead? The scenes became increasingly more clear as I had research about more directors and more of the symbolic shots that represented Western and Eastern type of filmmaking. The research process ultimately made my final project a better product. Through research I got a concrete idea of what to film and the techniques I needed to incorporate into each of my films to give it a certain feel.

Since the beginning of the project I’ve looked forward to actually filming on set. Production of the film definitely required more than just me. I needed an actor, two actresses, and a crew member to handle audio. The people I worked with gave the project so much life and brought a lot of joy on set. They genuinely wanted to help me with my project and showed up on time to every shoot I scheduled. They made the production feel so comfortable and it was fun to be on set. Sometimes I could be a perfectionist so I would  take the same shot over and over again, but they were very patient and even asked me to give them feedback on their acting so they could deliver a more natural performance. Even though I had a storyboard ready, my actor, actresses and crew member would give me suggestions on how to frame the shot in a better way, or they would remind me if they feel like I was missing an angle for the shot or if I wasn’t getting enough coverage of a certain sequence of dialogue. 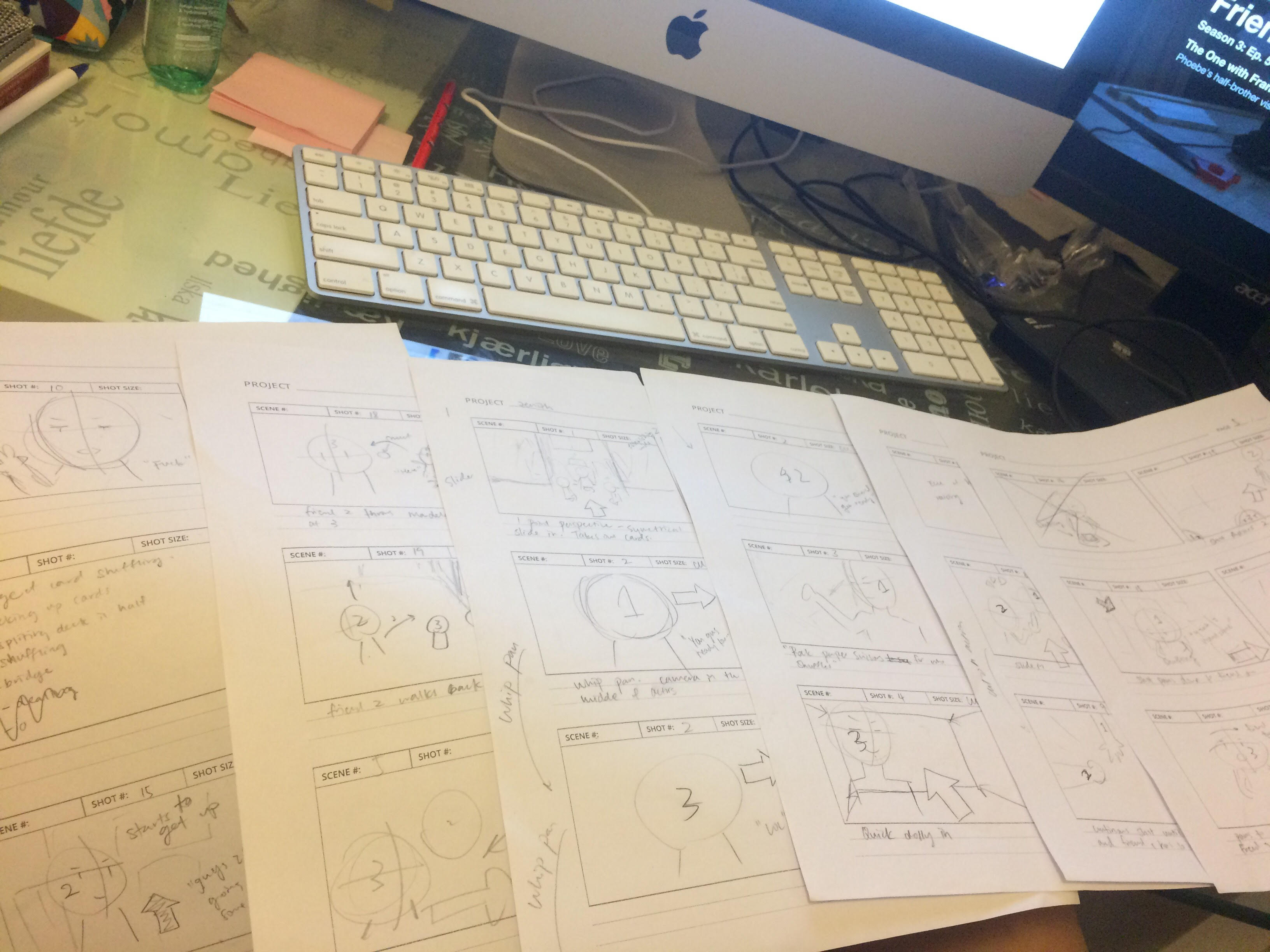 Not only did I collaborate with friends during production, I also used their help during pre-production. Initially I had a lot of difficulty coming up with a script for my films. I would go around asking for suggestions on a somewhat neutral script that could potentially be filmed in different styles. Ryan suggested that I film a breakfast scene, and Cameron suggested that I could watch the eating scenes in the TV show Friends for inspiration. Overall I’m very happy about the amount of collaboration that went into this project and I would say they were very successful in shaping my final Zenith project.

If I had to chance to change one thing about my project, it would be to start filming earlier to give myself more time for filming and editing. Due to the fact that I started filming in late March and early to mid April, I was very stressed that I might not be able to complete the film on time. I had left myself only a few days to edit both films. I felt like I was under a lot of pressure and was rushing through the project during the last few weeks.

I think I improved on visual literacy the most because my final product was a visual comparison between the two different styles. I personally think there’s an obvious difference between the two versions and if I were to show them to an audience that’s not as familiar with the Western and Eastern concepts, they would still be able to guess which version was which. I also improved my visual literacy through story boarding. I made sure that each shot was carefully framed and was pleasing to look at.

The skill that I lacked the most in was self direction. I knew that if I procrastinated I would be very stressed during the last few weeks before the project due date. But I used “I can’t come up with a script!” as an excuse and allowed myself to slack off during most of March. Later I overcame the obstacle by making up my mind to sit down and type up a script, no matter how bad it was. I ended up actually using that script because I saw the potential to interpret the script in lots of different ways and it gave me freedom on how to direct the film.

This project taught me that research and collaboration matters. In the future I will remember to always do research first. Also, I’ll be more eager to work with other people on a project because it’s much more fun than working alone.

Through this project I have successfully elevated my skills and experiences. Improvements I made included further developing my skills and technique with the camera, storyboarding, blocking, and framing. I started paying more attention to the background of my film. I was more sensitive to the whole frame rather than just focusing on the characters alone. I learned how integrate every aspect of a frame together to create a fuller image. This experience allowed me to gain a wider perspective on filmmaking and the long process involved in producing a motion picture.

During my presentation in May, I was pleasantly surprised that my audience found my project funny and enjoyable. When I was building my slideshow I noticed that I included lots of technical aspects in it, and I started to worry that I will put my audience to sleep. I then quickly started brainstorming ways I could include humor in my slides to compensate for the boring, lecture-style presentation. So I’m glad I was able to make my audience laugh and actually enjoy my presentation. I was not confident about my project initially, but the audience’s reaction really reassured me.

Lastly, I would like to say that when given the chance, we should always explore wide and learn about the different perspectives there are to the subject we are passionate about. I will always be grateful to have had the chance to learn more about filmmaking in the culture I grew up in and the culture I was born into.