Shadows hid people’s faces, and the harsh lights hurt my eyes. It felt like my face was twitching, though I knew it was probably unnoticeable. In the audience, I could make out the faces of friends, family, and strangers. Some were proudly beaming, while others closed their eyes, swaying to the music. I felt my voice getting more comfortable being heard, and between worrying about whether people liked the music or were just being polite, there were those rare moments of feeling empowered by the impact my performance seemed to have. I sang my last words, letting them ring with the guitarist and bassists’ final notes. But then, the suspension of magic was gone. I fell silent, and couldn’t bear to speak to introduce the next song. My friend playing guitar gave me a look, and I stared at our third member on bass in desperation. These weren’t my songs; this wasn’t my music. I didn’t feel like I had the right to speak on behalf of this art. I felt fake, as the audience assumed I had contributed in more ways than simply singing what I was handed. How could I let people credit the three of us as a group when the guitarist was the only one who wrote our songs? As the lead singer, I should have been the spearhead of the band, but I didn’t feel like the “lead” of anything.

It wasn’t until I joined Freestyle Academy, my high school’s communication arts and technology program, that I learned the true meaning of contributing. My concentration at Freestyle was filmmaking, and our first big project required us to work with a partner. Taking turns planning our shots, my partner and I shared the role of director. Once we finished filming our scenes, however, the editing process proved to be much more challenging. Unlike our peers, we decided to incorporate animation into our film, requiring us to learn how to use Adobe After Effects. Fearing that we had taken on too much, I began to pull away, falling into old habits where I contributed less than my partner expected from me. But she was going to hold me responsible for this project, expecting me to contribute and help solve problems. I could visualize our film, and in the process of rediscovering the idea that initially made me and my partner want to take on the challenge, I made the decision to refocus my efforts.

At Freestyle, it’s up to me to meet my deadlines and put forth my best effort, because not having work to present is just as disappointing as presenting something I’m not proud of. I realize now that if I don’t feel responsible for my success, or if I haven’t demonstrated the dedication I’ve learned I’m capable of, I can’t be content with my work. Freestyle helped me discover that I have the determination to commit to a project and see it through to its end, especially when I feel challenged.

Upon reconsideration, I’ve realized that I missed a unique opportunity in working with my bandmates. I chose to hide and not take on challenges. I hadn’t yet discovered what motivates me to be heard. As a film student, I learned that I am willing to take risks, exposing my ideas to scrutiny. The skills I have learned from Freestyle have led me to welcome feedback and encouraged me to be creative without limitations. Since becoming a film student, not once have I felt guilty for taking my share of the credit when working on projects. Freestyle helped me realize the confidence within me and my ability to face challenges head-on. I am proud that I now take ownership and hold myself accountable. Whether it is music or some other method of creative expression, the responsibility to be heard is on me.

My reflections piece was based on my love of the TV show That 70’s Show. However, because I didn’t feel it portrayed a perspective I feel particularly strongly about, in its place I have decided to show a trailer I made for my Visual Narrative project. I used the Adobe software After Effects to create both my perspective piece and my narrative trailer, and the story of a fish trying to get out of its confinements shows a deeper personal perspective. I feel strongly about traveling and seeing the world, something the fish continues to attempt to do throughout the film. Like the fish, I often feel held back by certain aspects of my life, however thrive in the moments where I can escape.

The following image shows how I created my video about That 70’s Show using After Effects. 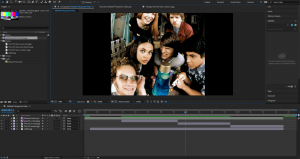